Hi, this is Part 3 of my Iceland trip!

We picked February and March to travel Norway, Finland and Iceland due to the increased chances of seeing the Northern Lights (or so they say) and of course, having reasonable amount of daylight in Iceland for our roadtrip.

Weather and climate: Temperature hovers around 0 degrees celcius, which is really not to bad as compared to its arctic neighbours. There were still plenty of snow on the road and all around, but driving in it was manageable (even for a first timer like me). The wind was obviously nuts!!!

Car rental: We rented a Kia Sportage 4WD (Automatic transmission) for a total of 68500ISK (~SGD750) including insurance and studded tyres via BlueCarRental and they are pretty good! Airport pickup available – just remember to choose Keflavik (KEF) airport instead of Reykjavik Airport if you are flying international! 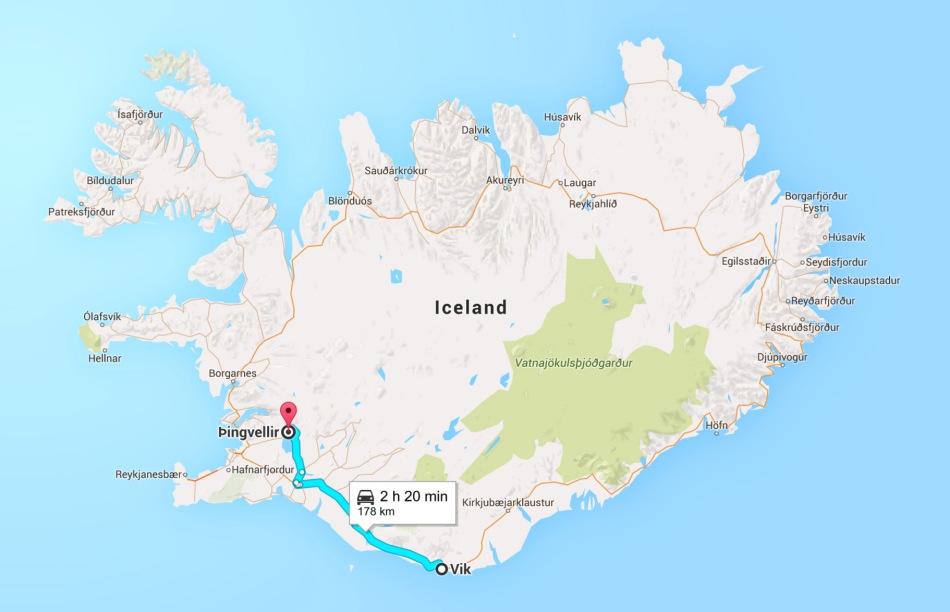 So we packed up and headed back towards Reykjavik area. We initially planned to spend a whole day within the Golden Circle, but I think I overestimated all the driving time and such. I guess I got too paranoid whilst reading about other people’s experiences with snow storms and their cars getting stuck in the snow, etc. haha!

Driving back took about.. 2-3 hours? The weather was not the greatest. Driving through Selfoss and towards Golden Circle was a little challenging as the roads were buried in snow. The heavy fog didn’t help either! The change of climate is very drastic in Iceland *clenches steering wheel*

We dropped by Thingvellir National Park (Google Maps link) for a quick tour before settling in our next Airbnb. From a photographer’s point of view, the grey skies have made the sights slightly underwhelming. The concept of two tectonic plates splitting Iceland into half and evidently appearing over ground sounds amazing. The bird eye view photos of the Thingvellir continental plates looked awesome, too. However, our visit to Thingvellir didn’t feel too impressive, I have to be honest.

It was definitely due to the grey skies and it being laden with snow which could not bring out the beauty of the split. Same goes for the Geysir and Gullfoss too, but I’ll cover that later. Superficially speaking, I think it’d be way more impressive when the skies clear up, so try to look out for the weather guys. Definitely affects the photos (if you care a lot, like I do hahahaha).

If you’re a scuba diver and have time, you should diving the Silfra Fissure!!! Where else in the world can you get to dive in between two continental plates, and crystal clear waters? I wish I did!!! 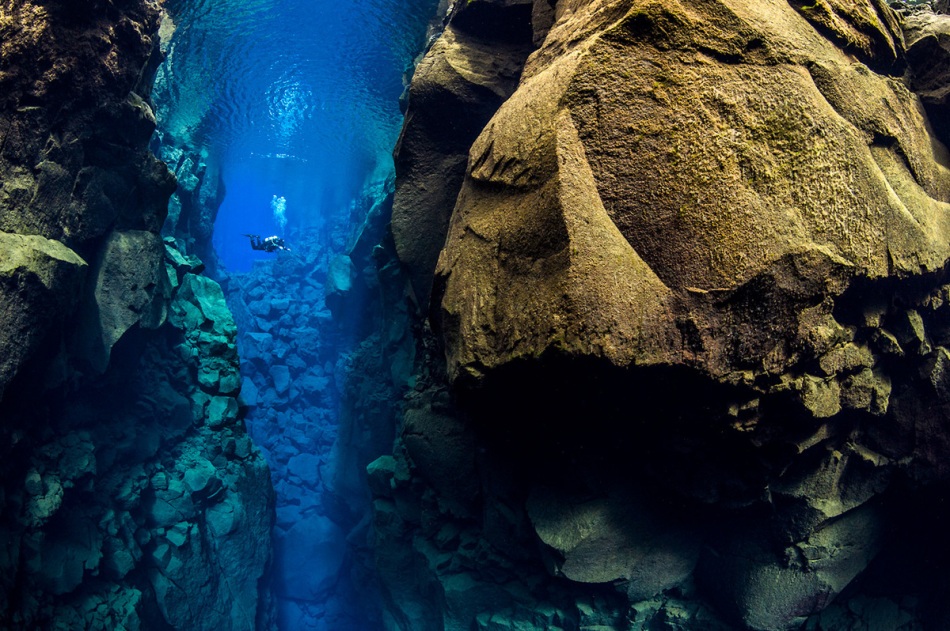 Settled down in our airbnb which is slightly outside of the city center, but it’s just a quick 5 mins drive away anyway so it’s no problem. The houses in the city are definitely smaller than what you can get in the ~wilderness~ but that’s ok. Still very, very clean and well equipped. I’m loving Airbnbs in Iceland!

We spent the rest of the afternoon stuffing ourselves with NORMAL food (been surviving on cup noodles, biscuits and pringles haha) and it felt good. BUT EXPENSIVE, of course! The city of Reykjavik is actually pretty hipster. Graffitis are everywhere but not in a tacky way, but more like.. a Melbourne hipster art scene feel, which I didn’t expect. Lots of stuff to shop too, but we controlled ourselves, hehe!

Our last full day in Iceland, and we dedicated it to the Golden Circle. Initially wanted to visit Blue Lagoon right before the airport due to its close vicinity but we had so much time, we might as well just drive and make full use of our day! Told you, I have really overestimated the timings. 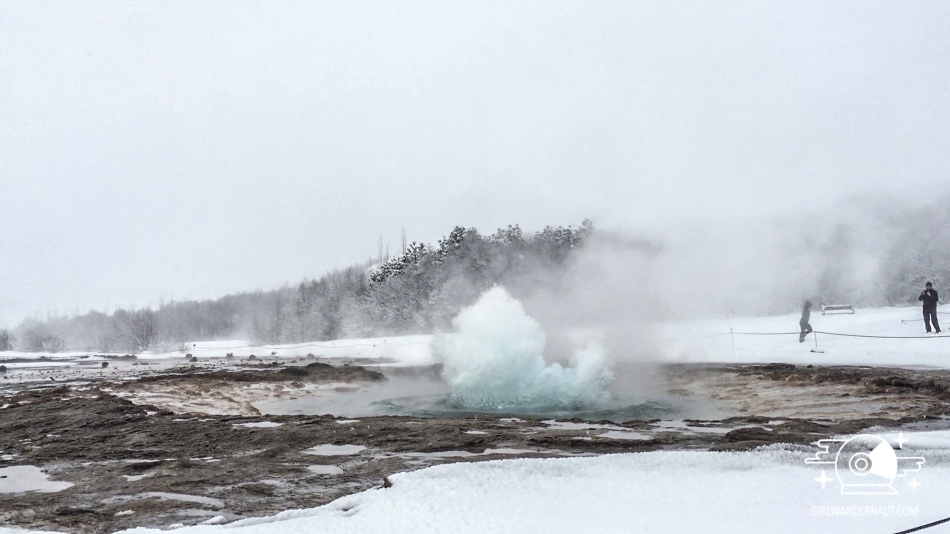 Arrived at the Geysir and the weather was still as bad as the day before! I was quite bummed! When the boiling water shoots up all the way in the air, it can’t really be seen on my camera because the colors are soooo similar! I’m just gonna keep it short.

Just a 15 minute drive away comes the majestic Gullfoss waterfall, which is apparently the biggest in Europe!! On a normal clear sky and bright sun, I think you’d most likely see a rainbow over the beautiful waterfall.. Here’s my version, anyway. 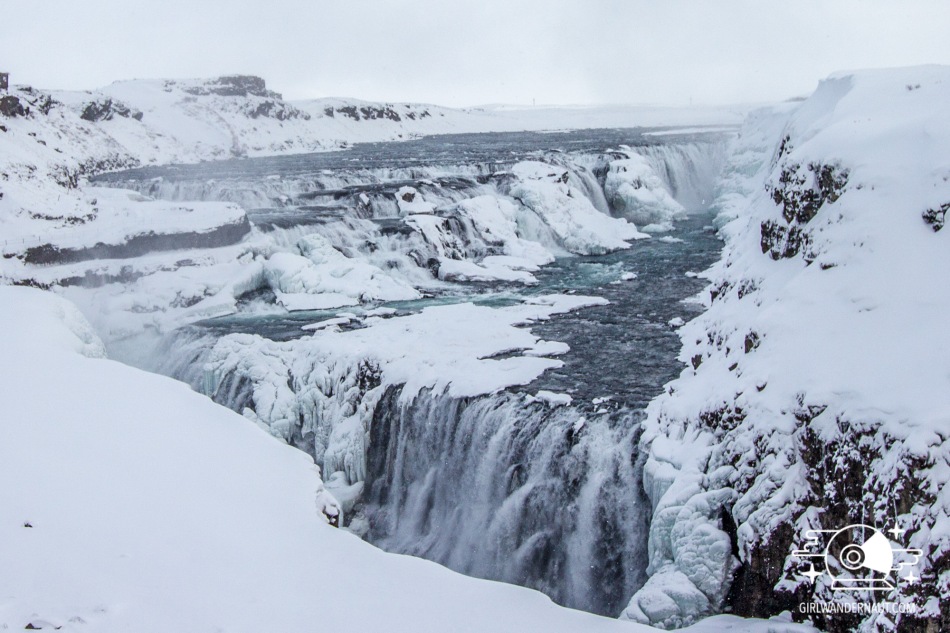 It’s reaaaaally huge! Can’t seem to translate well on my photos though. I think it’d be great to come here during summer time. Some of the hiking trails will probably be opened, and you can get nearer to the waterfall and get some nice photos with it!

So we decided to head to the Blue Lagoon without any intentions of taking a dip since we came to Iceland unprepared anyway. Decided not to bring any swimming suits but immediately regretted it. Looked soooo fun to be soaking in the hot spring!

WHAT A SHAME! This was taken at the ‘free section’ of the pool. Just a preview of what we’ve missed out… Oh well! Hahaha! Headed outside for a quick walk around the hotspring and it was pretty nice. Apparently the Keflavik area (where the Blue Lagoon is) has so much new lava! So we are greeted with lava fields everywhere.

So next up is my FAVORITE part of Iceland. We still had time, and we figured we should check out a beach area since we’re already towards the tip of southwestern Iceland. Googled last minute and it suggested to us Reykjanesta (Google Maps link). Cliffs, apparently. WHY NOT? I love cliffs. So off we went!

If you drove into Blue Lagoon, the road to Reykjanesta is straight on, deeper inside. Even though it looked so near on the map, it took us about… 45 mins to get to the destination. 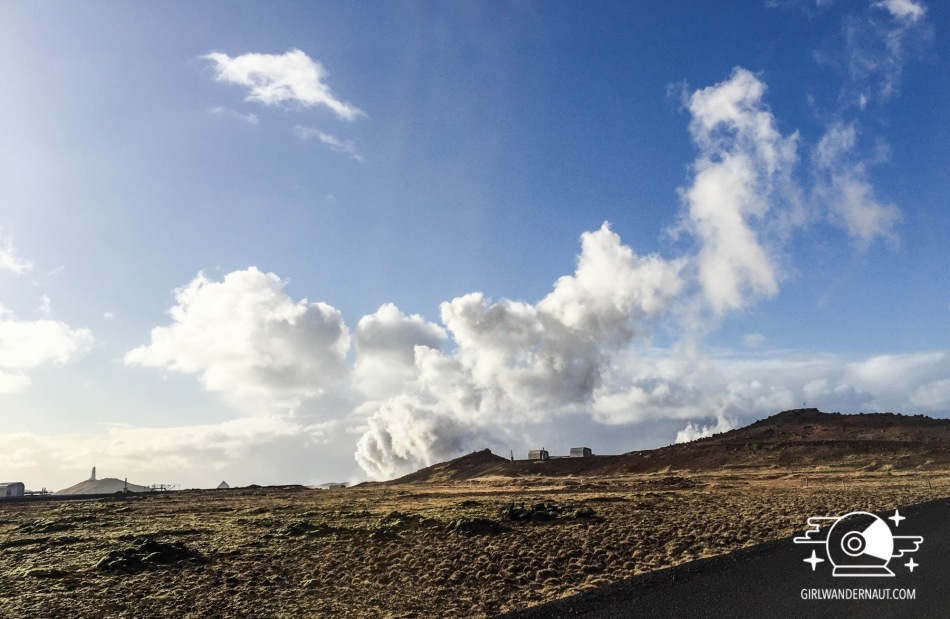 Getting there involved a lot of winding roads and vast landscapes so the drive did not feel long at all. I’m in love with the place already. 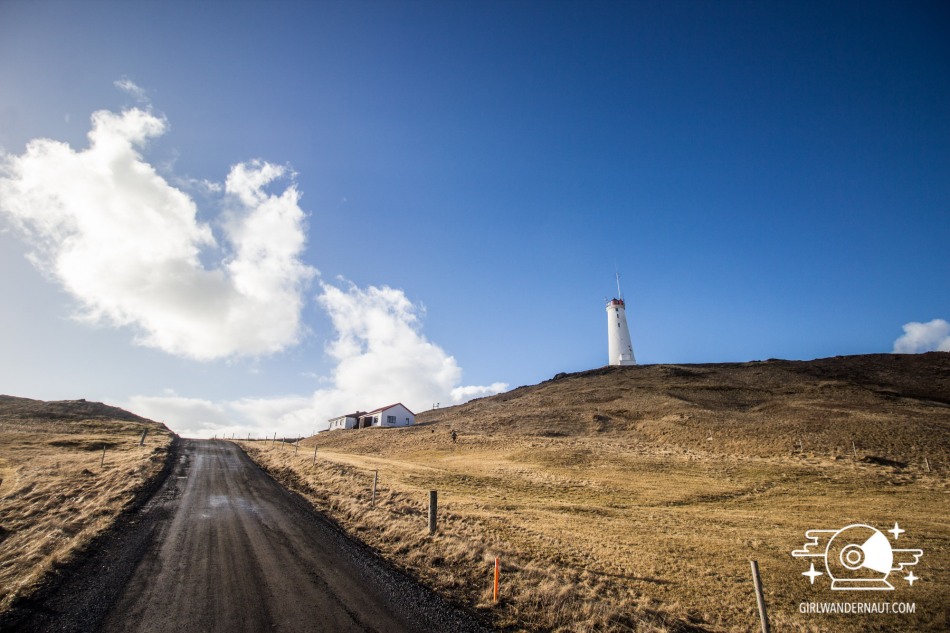 Greeted by a hipster and photogenic lighthouse. Ooh.

Followed the road and boom! The end of Iceland is right here! There’s parking space right around where this photo was taken and surprisingly there were a few other cars parked too. For the whole journey there was only one other car in sight so I was thought we might be heading to somewhere pointless. BOY I WAS WRONG! 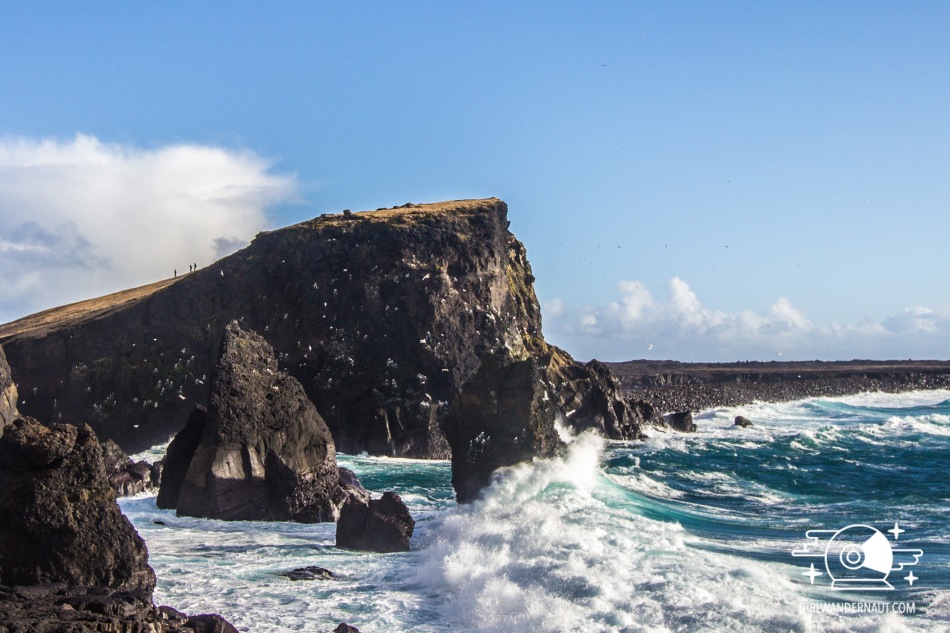 Massive waves, salty wind and seagulls everywhere. If you’re in love with the beach, you’d be in love with this place. The waves were so big it was almost terrifying, yet so therapeutic to watch. Couldn’t believe my favorite part of Iceland was not part of the original itinerary! 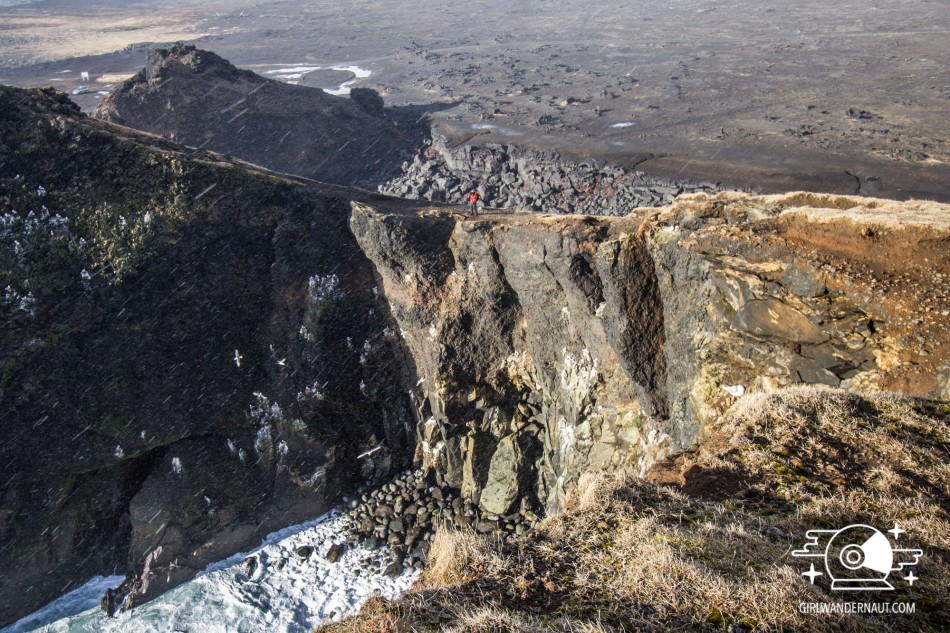 Hiked up the main cliff and omg the wind was too damn strong. At some point I felt like I was gonna topple over and fall off the cliff (my friend: “Can you please not say things like that!!!!” Amazing sights all round. The atmosphere is really something. 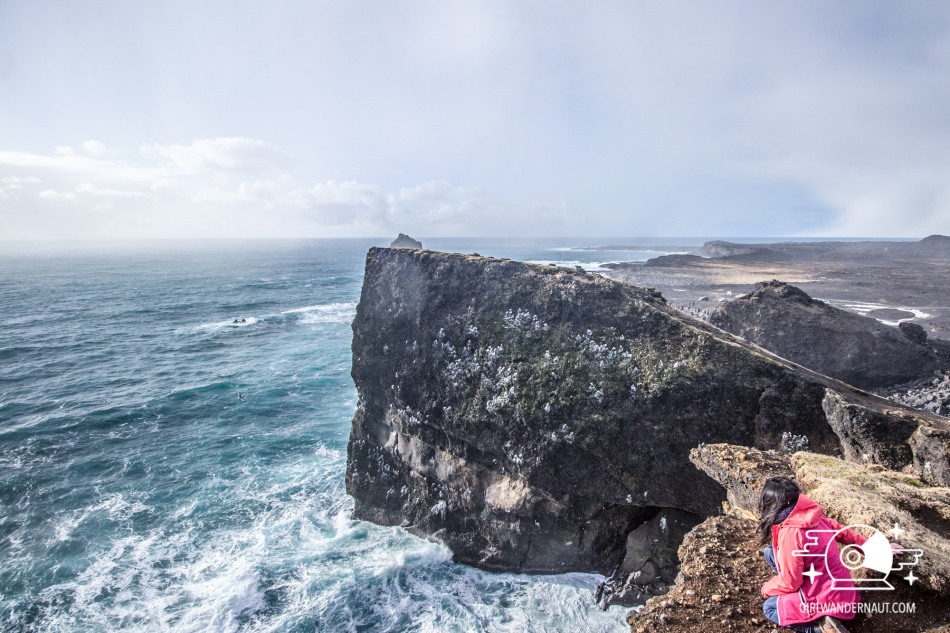 Trying to pose at the edge of the cliff doesn’t look that dramatic on camera but seriously, I was fearing for my life whilst I was slowly making my way towards the edge HAHA. Stomping hard on the ground in front of me before my weight took on just to be cautious.

Getting a panoramic view of the North Atlantic ocean. Amazing experience and horrible hair hahahaha! I’m in love with the colors of the water. 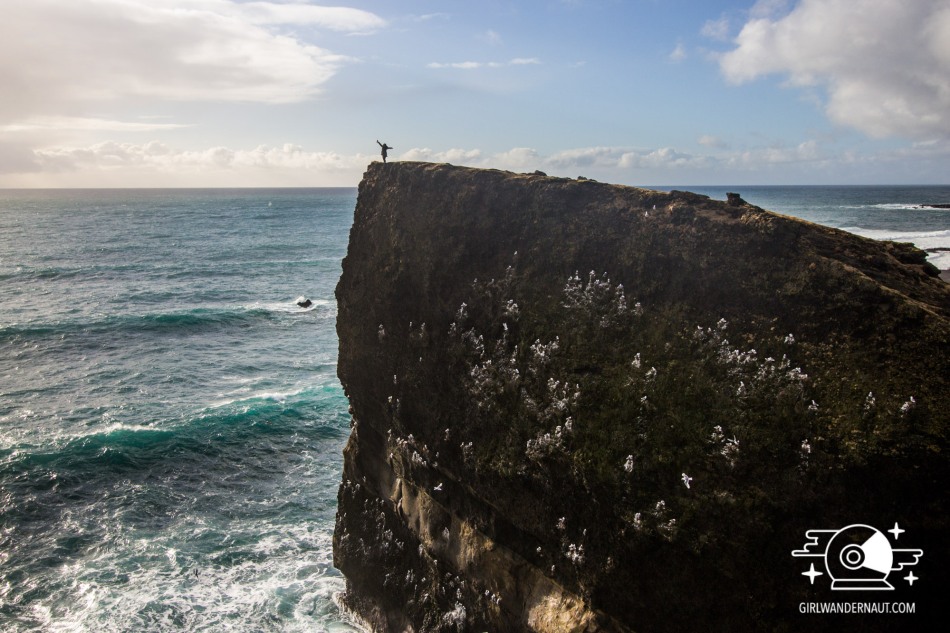 Well that took a lot of effort to execute. Friend waited at the main cliff whilst I ran up to the other side to pose for a photo, using nothing but weird hand signals for communication hahah! AND THEN vice versa. That felt like a legit workout.

Well this concludes the end of my Iceland trip! Thanks for reading and hope it has given you some ideas on where to go and what to see in Iceland. I’m sure there’s more, so do put your suggestions! Feel free to comment if you have any questions too 🙂 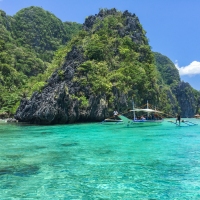